Kinji Shimizu, who grew up in the mountains of Iida City in Nagano Prefecture, established “Shimizu Kinji Shoten” as a wholesaler of underwear fabrics. 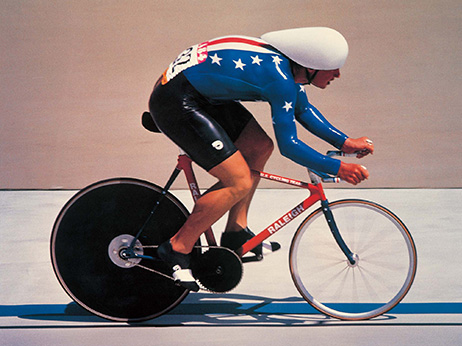 The planning and manufacturing sales of cycling jerseys began. They were supplied to the Japanese National Team for the Mexico Olympics. 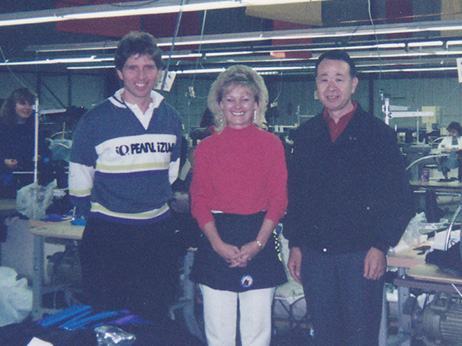 Cycling jerseys targeting the US began exports, advancing into the US market. 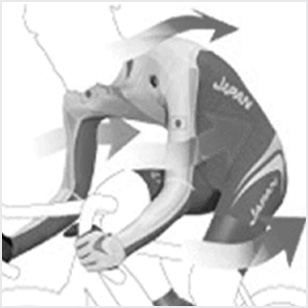 “AERO-CUT” was established with an original draping technology born from analyzing bike riding forms.This resulted in reducing the athlete’s physical fatigue and went on to become the basis of jersey developments, leading many athletes to victory. 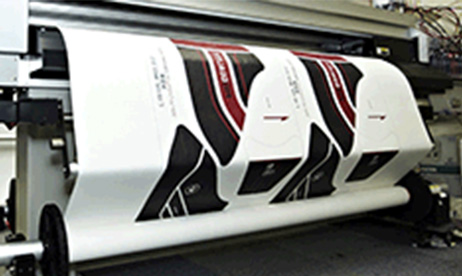 A custom order system was established to give free rein to jersey designs.In an effort to respond to requests for originality in team jerseys, the company was quick to establish a custom order system.
At the time, an increasing number of local cyclists were beginning to participate in road cycling events, which until then used to mainly be comprised of corporate teams. In addition to jerseys for competitors that fit tightly to the body, the company also produced a lineup of jerseys with a moderate looseness that could be worn for events. The company began to expand its original team jersey order service, not only for men but also for women and senior cyclists. 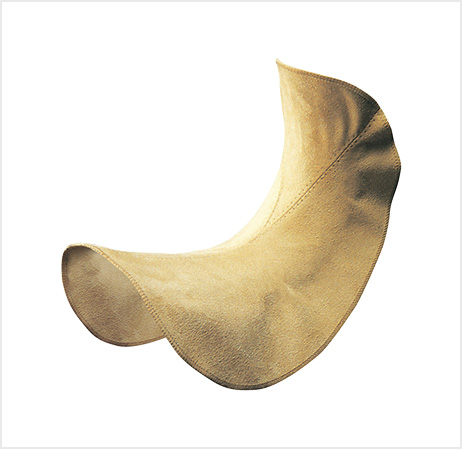 Artificial leather “Amara®” revolutionized cycling pads(chamois).Chamois (deerskin) leather began to be used for cycling pads(chamois) around 1970.
This resolved the issue of sore thighs, but the natural material hardened when washed and its maintenance was bothersome. In addition, it was difficult to obtain high quality leather in Japan. Through trial-and-error, the company developed the shock absorbing cycling pad “A Pad” using the artificial leather “Amara®.”
It did not harden when wet and its maintenance was also easy. This made it possible to spread cycling pants to those cyclists who, until then, could not afford the high price.

An AERO-CUT one-piece jersey was released after successfully being perfected through numerous improvements and developments.The company supplied jerseys to the American National Team for the Los Angeles Olympics, winning a total of nine medals - four golds, three silvers, two bronzes - in six events. 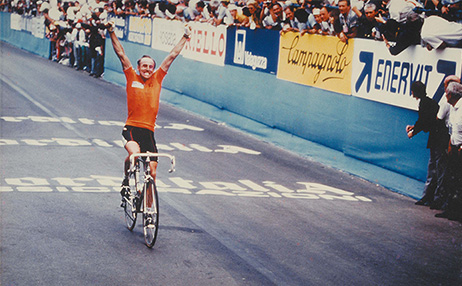 Zoetemelk, an athlete from the Netherlands National Team, won the World Cycling Championships. 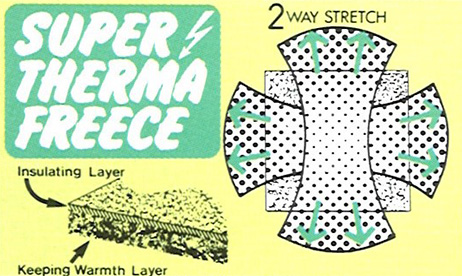 The company became the first to use a revolutionary sweat-absorbing and quick-drying material called “Field Sensor®.Cycling sports involve sweating a lot and dealing with that sweat was a large issue.
Particularly in Japan’s high temperature, high humidity climate, the stickiness of perspiration often caused discomfort and chills, leading to greater demands for materials that could quickly absorb and dry sweat.
In 1987, the company became the first in the world to use the revolutionary material called “Field Sensor®” for cycling jerseys with functions that excelled in absorbing and diffusing sweat and drying quickly. It was then further developed as a two-way material for products such as pants and tights. The front surface was always dry with hardly any sense of discomfort caused by the stickiness of sweat, allowing for a very comfortable wear. 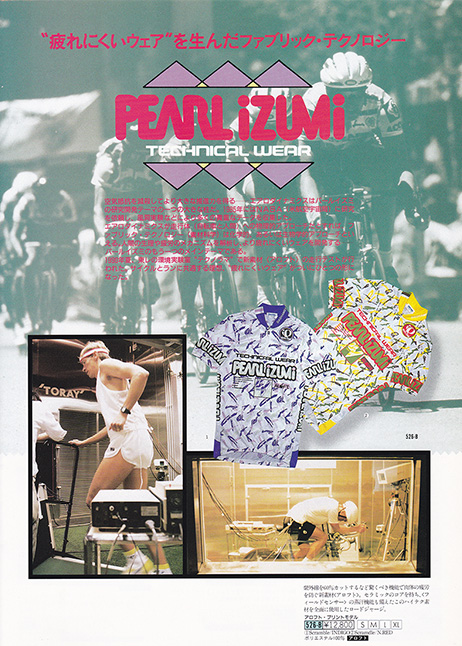 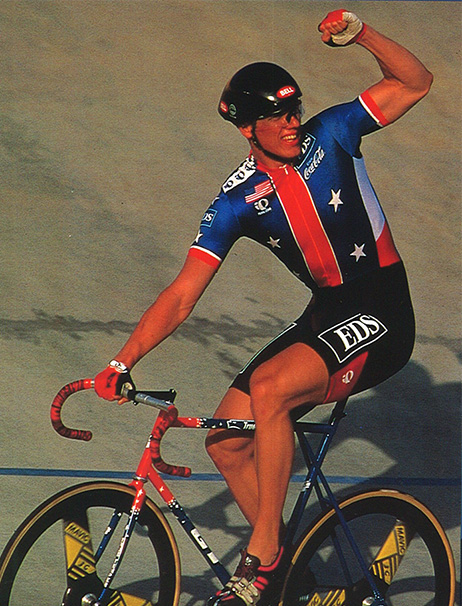 The company supplied jerseys to the Japanese National Team for the Atlanta Olympics, winning a bronze medal for the 1 km time trial race. Additionally, jerseys were supplied to various other national teams, such as the USA, Kazakhstan, China, etc. 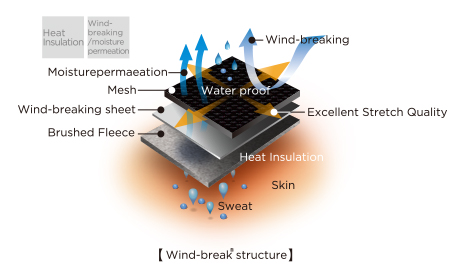 A revolutionary winter jersey material called “Wind Break®” was developed.At first, “Wind Break Fleece” was produced as a functional fleece that included a special film in between the fleece materials. However, this ultimately produced a material that blocked the entry of cold air, had high moisture permeability and did not get stuffy. Almost as soon as it was released, it garnered immediate attention.
It later went through numerous improvements to be completed as the multi-layer structured winter material known as “Wind Break®.” It shuts out cold wind and has excellent permeability (5,000/m²/hrs) and water resistance (10,000/H2O). This allows it to let out sweat quickly without causing stuffiness. It is also highly stretchable, allowing for easy movement. Many cyclists have given it high praise as a staple winter material that allows them to enjoy bike riding in comfort and warmth even during the coldest months. 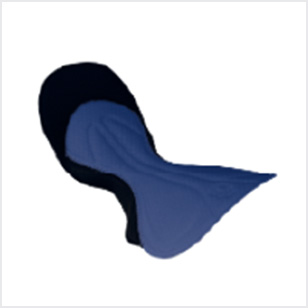 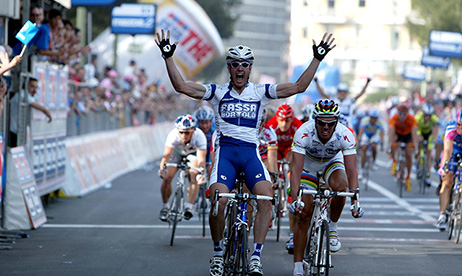 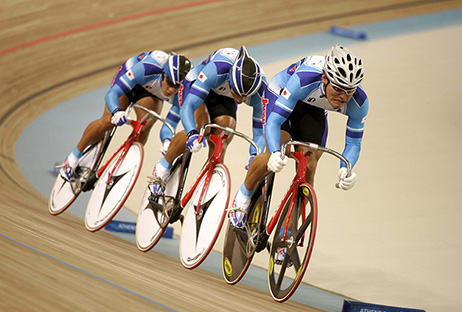 The company supplied jerseys to the Japanese National Team for the Athens Olympics and the men’s team, wearing aero-suits using the air resistance reducing “Speed Sensor®” material, won the silver medal in the sprint race.
With an original AERO-CUT pattern and multiple types of materials as a base, the drag characteristics that co-occur with speed changes were measured and analyzed in a wind tunnel lab using a three force component measuring device. By deducing the appropriate conditions required in track cycling races, the ultimate high-spec material “Speed Sensor®” was developed to bring victory to athletes competing in a world where 1/1000 seconds matter. The drag force was reduced by a maximum of roughly 50% compared to existing materials (company comparison) and developers chose materials suitable to the Japanese National Team’s sense of speed and acceleration ranges. The material demonstrated its efficiency at almost all speed ranges, from the initial acceleration to the intermediate speed ranges to the top speed ranges.
The company supplied jerseys to the Japanese National Team for the Athens Paralympics, winning the silver medal in the tandem sprint race and the bronze medal in the road race.

“Octane” was released, which uses a titanium sole to maximize lightness and rigidity.

An ultra 3D structured concept for gloves was registered as “Tri-D System®” with excellent operability that allows users to ride for long hours without tiring.Cycling gloves are required to fulfill various roles, such as being able to easily grip the handle, ensuring a good, non-slip grip and high operability.
At the time, demands were rising for comfortable gloves with high operability that could easily grip the handle and could also be worn for long hours without tiring.

A color tag system by temperature zones was introduced to make it easier to layer and coordinate clothing.In addition, the long-awaited cycling “3D-Neo” pad was released. The women’s cycling pad(chamois) was developed first by adjusting it to the standards of Japanese people and being particular about how it feels against the skin. The cycling pad(chamois) was monitor tested by a variety of users ranging from amateur cyclists to top athletes from corporate teams. It achieved excellent sweat absorbency to suit Japan’s climate, which produces excessive sweating. The high stretch quality of the fabric also allowed for smooth movements while pedaling.
At the Peking Olympics in 2008, Japan won its first silver medal in keirin, a race originating from Japan.

An LED light was released to increase visibility during night rides. 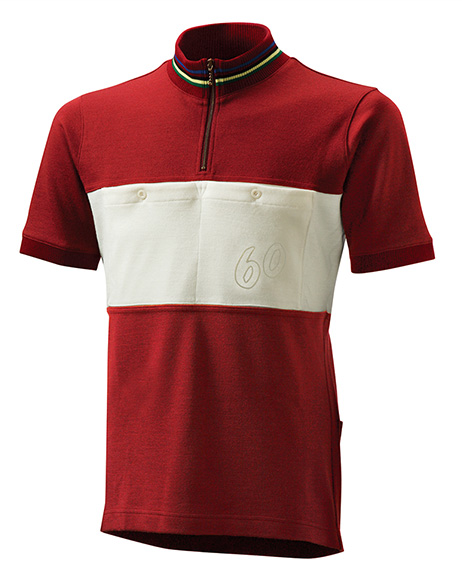 In 2010, a jersey commemorating the company’s 60th anniversary was produced.The company released a jersey manufactured using seamless sewing technologies to offer a smooth and comfortable wear.
At the time, seamless sewing was being used for materials without elasticity, but it was said to be difficult to apply to products that required high elasticity such as cycling jerseys.
However, the company spent many months and years researching with sewing manufacturers until finally succeeding in making it a product. The method involved connecting fabrics using high-frequency bonding and applying a special tape over it. Therefore, the seams on the skin side are flat. By repeating complex and intricate processes, the company was successful in developing a jersey that felt surprisingly smooth against the skin and comfortable to wear. 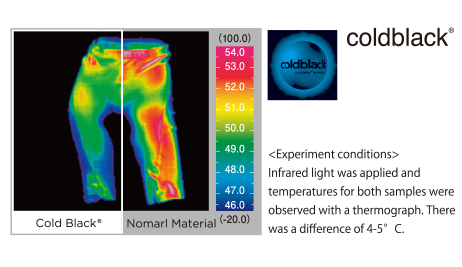 A jersey using “Cold Black®” was released, a revolutionary material that lowers temperature on the inside of the clothes to keep the body cool and prevents sunburns. 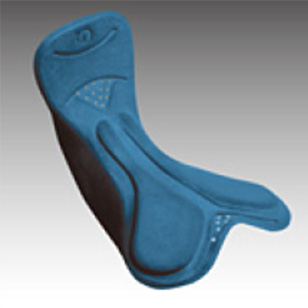 “3D Neo Plus” was released as the most prominent cycling pad(chamois) that reduced the feeling of it being worn to the extreme and conformed as one with the body with its 3D structure.The cycling pad(chamois) used stratified cushioning that allowed it to adapt to any sort of cycling posture.
This development led cycling pads(chamois) to even higher planes. Pearl Izumi’s racing pants caught the eyes of professional cyclists from Europe and across the world.
The company supplied jerseys to the Japanese National Team for the London Olympics, contributing to winning the bronze medal in the men’s road time trial race.

“Quick Bib” was developed in response to cyclists’ requests.Bib-type jerseys required cyclists to remove the top as well when using outdoor restrooms, even on cold winter days. Many cyclists voiced the tediousness and reluctance of removing their clothes, which led the company to engage in developments to fulfill their wishes.
The resulting product allowed for it to be smoothly worn and removed with a front clasp and a zipper along the waist so the bib and tights can easily be separated. The company has obtained a patent for this design. (#5622983) 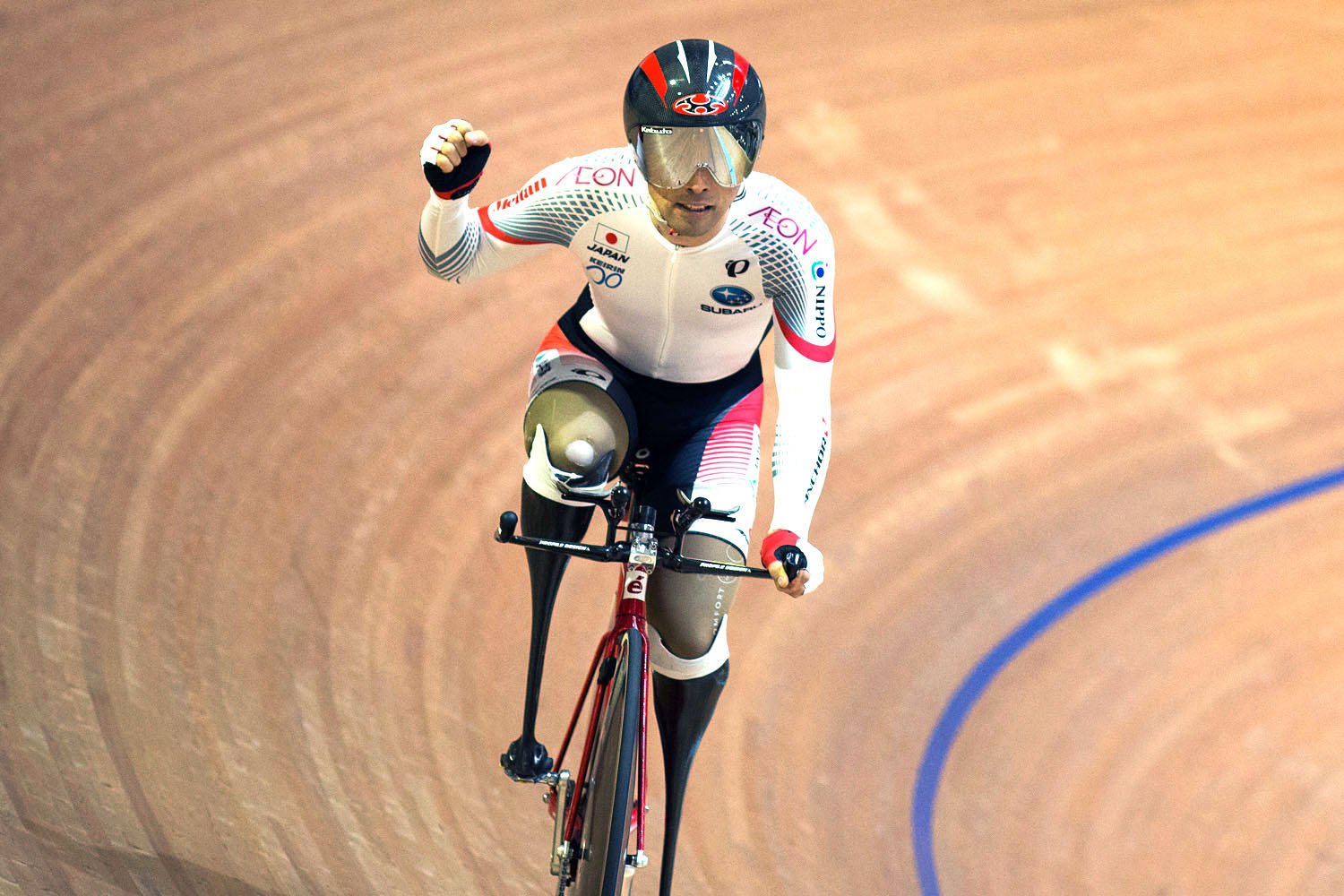